The Church of St. Mary 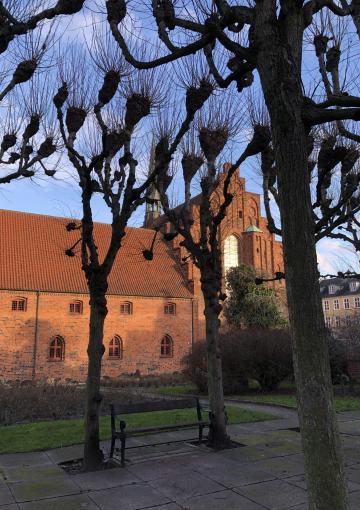 The Church of St. Mary, originally an abbey church,  was constructed as a part of the  magnificent Karmeliter monastery (Our Lady Monastery) in Elsinore by poor White Brothers during the years 1430-1500. The White Brothers were mendicant friars who came to Denmark at the instance of King Erik of Pomerania. He donated the site to them and it is said that these erudite men were under the particular protection of the Virgin Mary and that this is the reason all of their monasteries were consecrated to her.

In 1819 the Church of St. Mary became one of only two parish churches at that time, but it was not until 1851 that the German services in this church were terminated. However, the monastery continued to function as a hospital until 1916, where the last of the residents were relocated to the city's new old people's home. Today a part of the monastery is occupied by the administration of the Elsinore diocese, but several of the rooms are still as they were in the Middle Ages and are along with the church itself one of the foremost tourist attractions in Elsinore.

Following the reformation in 1536, monastery was dissolved and converted into a hospital and old people's home in 1541 by King Christian the Third. It was called Our Lady Hospital or Common Hospital. The abbey church was at one point scheduled for demolition but at the request of the many Dutchmen and Germans living in Elsinore at the time, Frederik the Second, himself of German descent, donated the church to them and in 1576-77 it became the "German" church in Elsinore and was administratively separated from the hospital.

The church along with the monastery was thoroughly restored in 1900-1907 by architect and professor H.B. Storck and displays a great number of its original murals. A large part of the interior was donated to the church in the time of King Frederik the Second. The organ, one of the main attractions, dates back to 1662-63, where the resident organist was the famous composer Diederich Buxtehude. Alterations made in 1854 and again in 1959-60 were recently reversed as the organ was carefully restored and reconstructed and thus today presents itself as in the time of Buxtehude. The frequent organ concerts held at the church are therefore an exceptional experience and draw a large audience. 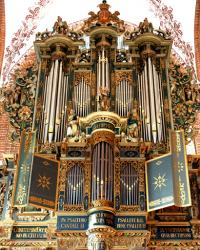 Read about the church organ.

The Church of St. Mary

The church is closed  on the 5th of June ("Grundlovsdag), Christmas Day and New Years Day.